Better broilers from top to toe

Efficient broiler production is not all about performance. Animal welfare issues such as foot pad lesions are an equally important concern. The results of a feeding trial indicate that starter feed with specialty soy protein could be part of the solution.

Foot pad lesions – or dermatitis – are most common in younger broilers as their skin is thinner and more sensitive. Once lesions develop, the affected birds are also at greater risk of infection.

Among the causes are wet bedding and foraging areas and high humidity, caused by poor ventilation. Another is diet.

When feed contains a high level of poorly digestible protein, then the level of nitrogen in broiler droppings will go up and the droppings will become looser and stickier, clinging more easily to the broilers’ feet. Due to the caustic nature of the droppings, the risk of foot pad lesions is increased.

In a recent feeding trial, performance was compared when broilers were fed starter diets containing a range of protein sources. The control diet contained 34.4% soybean meal, which is the most used protein source in broiler feed. Due to a typically high level of anti-nutritional factors, however, soybean meal can be hard for young broilers to digest.

In the trial starter diets, 5% of the soybean meal was replaced with potato protein, fish meal, corn gluten or HP AviStart. Developed by HAMLET PROTEIN, HP AviStartcomprises digestible proteins and a low level of anti-nutritional factors and is made by co-processing soy and yeast.

The trial was performed with five treatments, six replicates and 37 Ross 308 broilers per replication. Feeding was divided into three phases: starter (day 0-11), grower (day 12-28) and finisher (day 29-42). After the starter phase, all broilers received standard commercial grower and finisher feeds.

The trial results show a clear difference in the incidence of foot pad lesions between starter diets. While potato protein and fish meal perform well, the lowest incidence of lesions is evident in broilers fed the diet with HP AviStart. 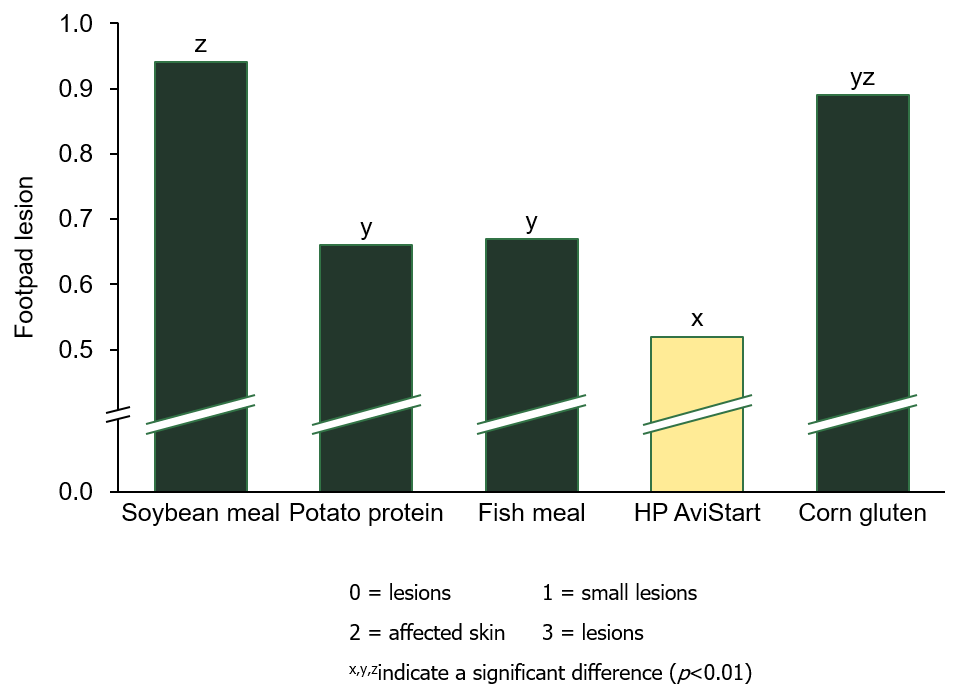 Foot health was, of course, only one aspect of broiler performance under investigation. The trial also measured pen weights, feed intake and day-to-day mortality. Feed conversion rate (FCR) and weighing were finally calculated on day 42.

Once again, HP AviStart emerged as the top-performing protein source, demonstrating the lowest FCR and mortality and the highest production index (PI).

Overall, the feeding trial confirms that HP AviStart has a strong carry-over effect from the first ten days of starter diet to the final day of the broiler production cycle. Broilers performed better all round – also under their feet.