Can soy be the sustainable protein of choice?

By Lars Sangill Andersen, nutritionist at Hamlet Protein and All About Feed Sustainability and Welfare issue

Reckless cultivation has given soy a bad name in some markets. A closer look reveals that responsibly produced soy protein is better than many alternative feed strategies for piglets and the planet.

The sustainability of soy has been a topic of discussion for years. Concerns about the way soy is cultivated, genetic modification and the climate impact of transport across the world have caused some to voice a preference for locally produced alternatives.

These are all important matters to discuss. But, there are other sides to the soy debate – including the reasons why soy is the most cultivated oilseed in the world, with a total global harvest which is bigger than that of all other oilseeds together. According to Statista, world soybean production totaled just over 336 million metric tons in 2019/2020.

In terms of production per hectare, soybean yield in the US and Brazil is slightly lower than the rapeseed yield from good soil in Europe – around 3.3 tons compared to 3.5 tons. Sunflower yield per hectare is considerably lower at around 2.2 tons.

However, when you look at protein content, the picture is quite different. While sunflower and rapeseed comprise on average 18.5% and 21.5% protein respectively, the protein content of soybeans ranges from 38% to 40%, depending on where it is grown. In terms of protein quality, measured as the content of digestible amino acids, soy also gets the highest score.

This makes soybeans by far the most efficient source of plant-based protein for young animal feed with regard to protein yield, quality and digestibility.

For many, the primary concern about soy relates to its cultivation. Stories about rainforest, cleared to make way for soybean plantations, are disturbing to say the least. To address this, the Roundtable on Responsible Soy (RTRS) was founded in 2006 – a non-profit, multi-stakeholder organization that promotes the production, trade and use of responsible soy.

As a member of RTRS, Hamlet Protein offers RTRS-certification on our genetically modified products. This secures that the soy is produced environmentally-correct, socially-appropriate and economically-viable which means without deforestation or conversion of natural habitats.

For those who seek a non-genetically modified alternative, Hamlet Protein draws on raw materials certified under the ProTerra standard for soy from a fully traceable, non-GMO source. All raw materials are processed in an energy-efficient plant, where surplus heat is recycled and no wastewater is discharged into the public sewerage system.

The animals’ efficient use of soy protein is another sustainability argument in its favor. This is particularly true of the specialty soy proteins produced at Hamlet Protein. Due to their minimal content of anti-nutritional factors (ANFs), young animals such as piglets can easily digest and absorb the nutrients in their starter feed. There are several reasons why this is important.

For farmers in the EU, the level of nitrogen in animal manure can make the difference between an environmental approval being granted or not. This is where a specialty soy protein low in ANFs can perform better than a high-quality animal protein source like fishmeal. Compared to the Hamlet Protein product HP 300, which contains less than 6% indigestible non-protein nitrogen (NPN), for example, fishmeal may contain from 15% to 30% NPN, which is passed from feed to manure.

Beyond the zinc ban

Another top-of-mind issue for farmers revolves around the use of antibiotics and zinc. Since the use of antibiotics as a growth promoter has been banned in various regions around the world, zinc oxide has become routinely used to relieve diarrhea after piglet weaning. However, as a heavy metal, zinc quickly becomes an environmental problem when high concentrations leech into soil, as highlighted in a Danish scientific report1.

Research further indicates that zinc oxide therapy can promote the development of antibiotic-resistant bacteria. A trial conducted at the University of Guelph found a higher prevalence of methicillin-resistant Staphylococcus aureau (MRSA) in piglets exposed to in-feed zinc oxide compared to a control group2. In a German study, zinc feed supplementation of piglets was seen to increase the proportion of multi-resistant Escherichia coli3.

Recognizing these issues, the EU and several Asian countries have voted to ban the use of zinc oxide in feed – a move that provides one more reason to use a highly digestible soy protein that reduces the nutrient load of manure.

From an animal welfare perspective, reduced piglet diarrhea is another clear benefit. As the results from a feed trial at China Agricultural University show, piglets fed Hamlet Protein’s HP 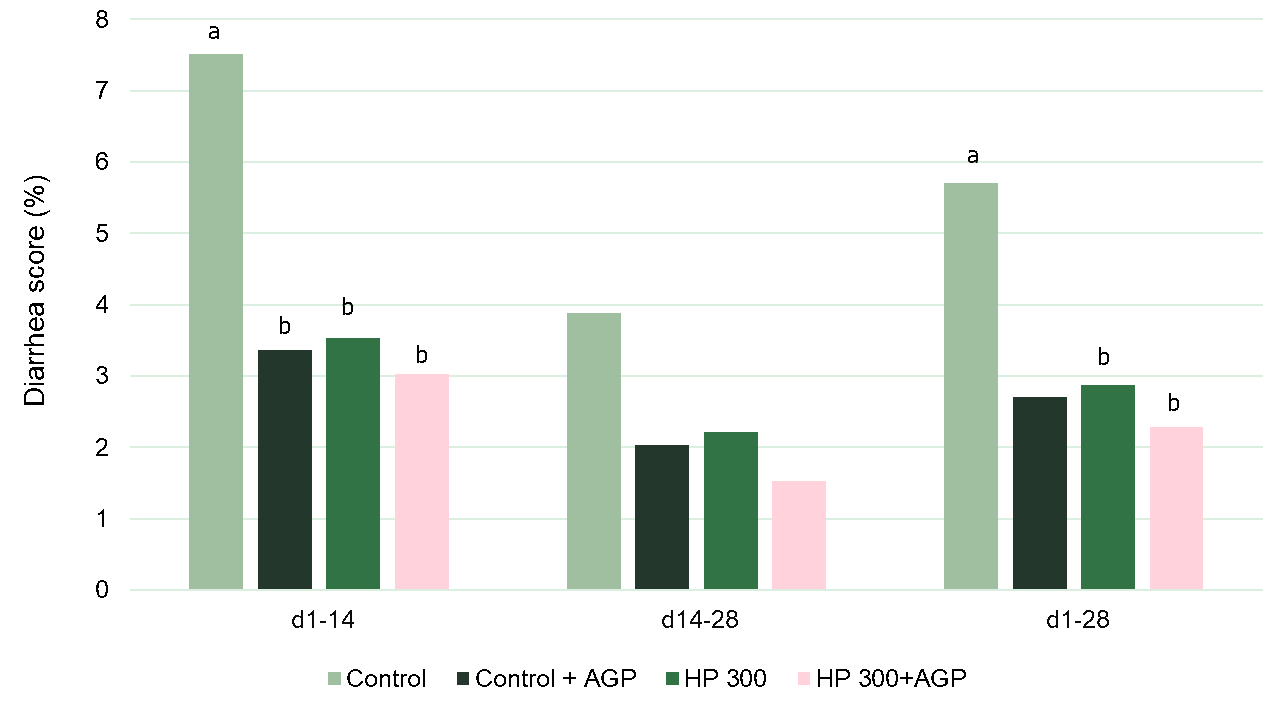 Figure 1 - Effect on diarrhea score of piglets. Piglets fed HP 300 had significantly lower diarrhea score compared to the SBM control and was not different from piglets fed AGP containing diets.

The study also concludes that reduced gut irritation and inflammation are a likely explanation for the improved oxidative status of piglets in the HP 300 group. An investigation of the piglet gastrointestinal tract further shows an increased capacity for nutrient absorption (figure 2). Again, this performance is driven by the low content of anti-nutritional factors in HP 300.

Healthier growth Piglets fed a soy-based starter diet with minimal ANFs are less vulnerable to gastrointestinal upsets and are able to absorb more of the nutrients essential to healthy growth. Moreover, when they switch to a standard soy-based grower feed, their guts are already accustomed to soy, minimizing the risk of further issues for growth and performance.
Animal welfare has gained increasing consumer attention in recent years and is an integrated theme in the UN Sustainable Development Goals. With this in mind, there is every reason to include soy in efforts to improve the sustainability of livestock farming. When cultivated and processed in a responsible manner, soy can be the sustainable protein source of choice for animals, consumers and the planet.

Referral to the article is made possible with kind permission from All About Feed.

Ask Lars about this