The ban or rejection of the use of antibiotic growth promoters (AGP) in poultry feed in many countries as well as the increasing restrictions on the use of antibiotics therapeutically are leading to a new paradigm where terms such as "intestinal health" or "alternatives to antibiotics" have become very common in the collective lexicon of poultry industry and research. The absence of AGP in the feed indeed exposes underlying intestinal problems not necessarily related to infections but to inflammatory responses to dietary factors.

In our time, there are numerous feed additives developed with the motivation to replace AGP. However, even with the multitude of thinkable additive mixtures, the composition of the basal diet and the quality of its ingredients undoubtedly play a star role in AGP-free production systems. In this context, the quality of soybean meal (SBM), a key ingredient in any poultry feed globally, and its contribution of anti-nutritional factors (ANF) in feed can greatly covet the intestinal function and health and, consequently, the development and growth of chickens.

In this article, we will review how dietary components can be the origin of intestinal issues in chickens and the mechanism of action of the AGP by which they cover up these problems. In the next issue of The Poultry Site, we will address the importance of reducing soy anti-nutritional factors in chicken feed, when we no longer have AGP.

Inflammatory reactions and oxidative stress are involved in commonly intestinal disorders of broiler chickens. Gut inflammation is actually a generic response of the innate immunity, part of the complex host defense system against harmful stimuli. It is important to note that intestinal inflammations in chickens are not only due to infections. Thus, Kogut et al (2018) pointed out that, besides acute pathological inflammations (due to infections), one of the most recurrent kinds of gut inflammation in chickens is sterile inflammation. This is a low-grade chronic inflammation due to non-infectious stimuli, and for the most part to certain ANF existing in the feed. In this sense, it has been shown that the antigen beta-conglycinin, present in soybean meal, as well as cereal gluten prolamins can lead to gut inflammation. This seems to be mediated by an increased expression and production of several pro-inflammatory cytokines in the gut, altered expression of tight junction proteins in the intestinal epithelium, and apoptosis (Chen et al, 2011; De Punder and Pruiboom, 2015; Peng et al, 2018). Other triggers of sterile inflammation of dietary origin are lipids with a certain degree of rancidity, which are an important source of reactive oxygen species (ROS) that are powerful inducers of inflammation in the mucosa, as it is mentioned later in this article. Thus, the quality of fats and oils added to feed, as well as the quality of all those raw animal origin materials with high lipid content (e.g., fishmeal, poultry byproduct meal) can play a relevant role in the genesis of feed-induce sterile inflammations (Mavromichalis, 2019).

During the inflammatory response, phagocytic immune cells produce free radicals such as ROS and reactive nitrogen species (RNS, e.g. nitric oxide), upon activation of the oxidative enzymes NADPH oxidase (NOX) and nitric oxide synthase (iNOS), respectively, both induced by pro-inflammatory cytokines secreted in the framework of the inflammatory process (Tian et al., 2017). Thus, any type of intestinal inflammation will generate ROS and NOS, which will lead to a state of oxidative stress in the gut. These free radicals show antimicrobial properties but can also cause tissue damage during inflammation. In this regard, ROS and RNS are both main mediators responsible for the intracellular damages of carbohydrates, proteins, lipids, and nucleic acids, being highly reactive due to their unstable conditions with unpaired electrons (Lauridsen, 2019).

Furthermore, this inflammation-associated oxidative stress can modify the phenotype of several cells, resulting in changes in the expression of certain genes. For instance, under conditions of oxidative stress in the gut, there is an upregulation of the expression of several pro-inflammatory cytokines, as well as a downregulation of occludin and mucin 2, molecules responsible for the integrity of the intestinal epithelium (Ducatelle et al. 2018). Thus, oxidative stress generated during intestinal inflammations will increase the severity of these inflammations, entering a vicious circle, difficult to overcome, which will lead to the establishment of a chronic inflammatory state, with significant unwanted biological consequences such as growth decay (Figure 1). On the other hand, as previously mentioned, inflammation derived and inducing oxidative stress can be even more aggravated by the inclusion of animal-origin feed ingredients rich in rancid fats, which will initiate an additional oxidation cascade in the chick intestine, increasing the secretion of proinflammatory cytokines. 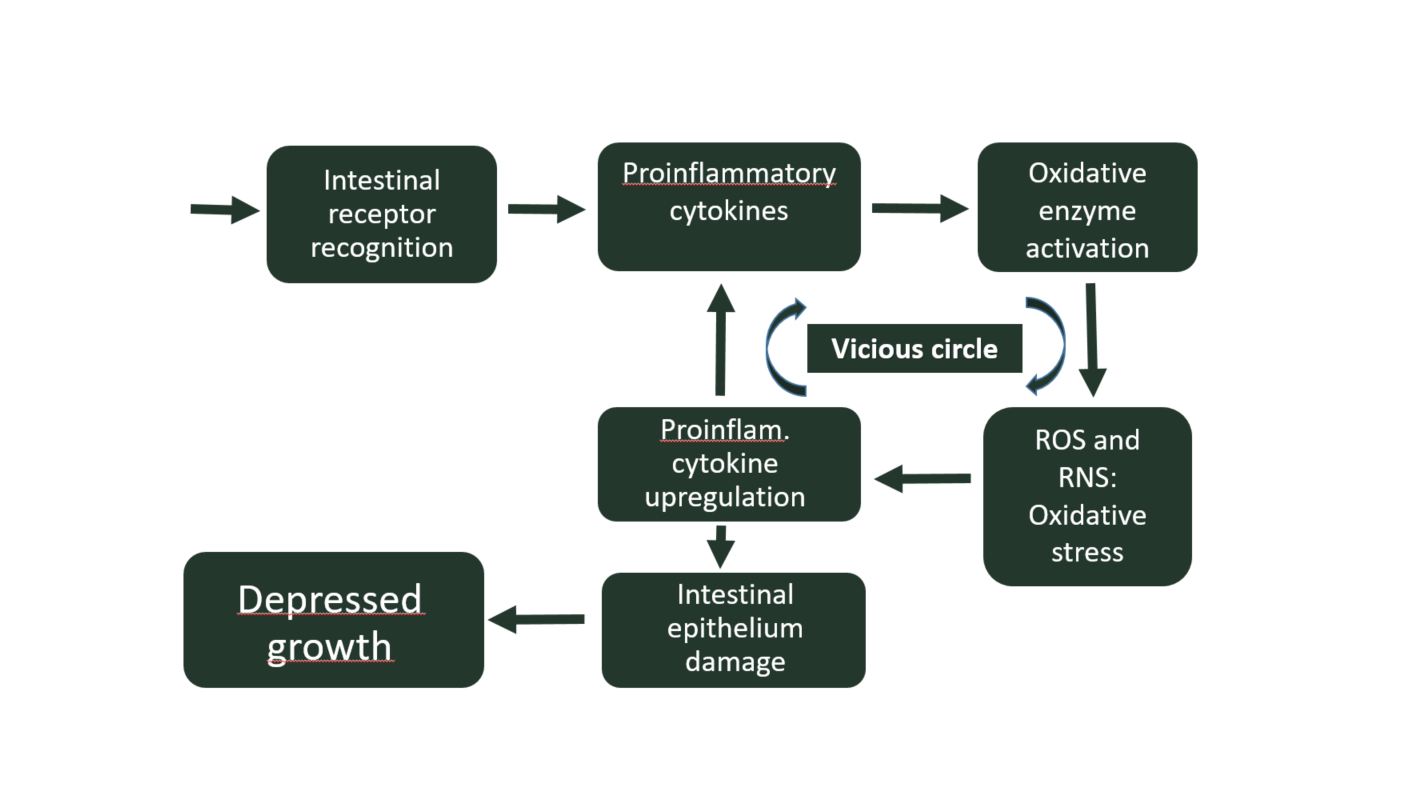 This kind of intestinal disorders are more prominent in chicks previously naive to inflammation-inducing feed ingredients. Therefore, young chicks react through an inflammation response that may end up being complicated by opportunistic bacterial pathogens present in their immature gut. However, when AGP are added to feed, such feed-induced inflammatory responses are mitigated by the anti-inflammatory effect of AGP.

In recent years, the antimicrobial effect of AGP has been questioned, since the concentrations they reach in the intestinal lumen are sub-therapeutic and therefore lower than the minimum inhibitory concentrations for pathogens. Furthermore, uninterrupted use of AGP induces antibiotic resistance in pathogens. On the contrary, the anti-inflammatory effect of AGP, as their main mechanism of action, has been gaining relevance. What many antibiotics have indeed in common is that they accumulate in inflammatory cells. Consequently, most accumulated antibiotics can inhibit phagocytic inflammatory cells of the innate immune response in the intestine. The relevant outcome of this accumulation in phagocytic cells is the reduction of the inflammatory response. Therefore, the levels of pro-inflammatory cytokines are lower in AGP-treated animals, which in turn will result in lower catabolic inducement, typical of inflammation (Niewold, 2007). In other words, AGP inhibit inflammatory responses that slow the growth of chickens. Therefore, when there is no AGP in the feed, the feed-induced sterile inflammations reemerge. A good strategy will be trying to minimize the occurrence of such feed-induced inflammations beforehand by reducing the amount of dietary stimuli (e.g. ANF) in the basal diet, instead of mitigating them with AGP once they settle down in the intestine (Figure 2).

In conclusion, feed-induced sterile inflammations and oxidative stress in chickens can come from quite a few ingredients. The resulting inflammation-oxidative stress vicious cycle impairs health and performance. Therefore, we should ensure that our AGP-free feed does not contain ingredients that are likely to stimulate inflammation or, at least, we must reduce the amount of anti-nutritional factors in feed as much as possible. This is particularly important in (pre-) starter feed. The sooner we nip the aforementioned vicious cycle in the bud, the better. 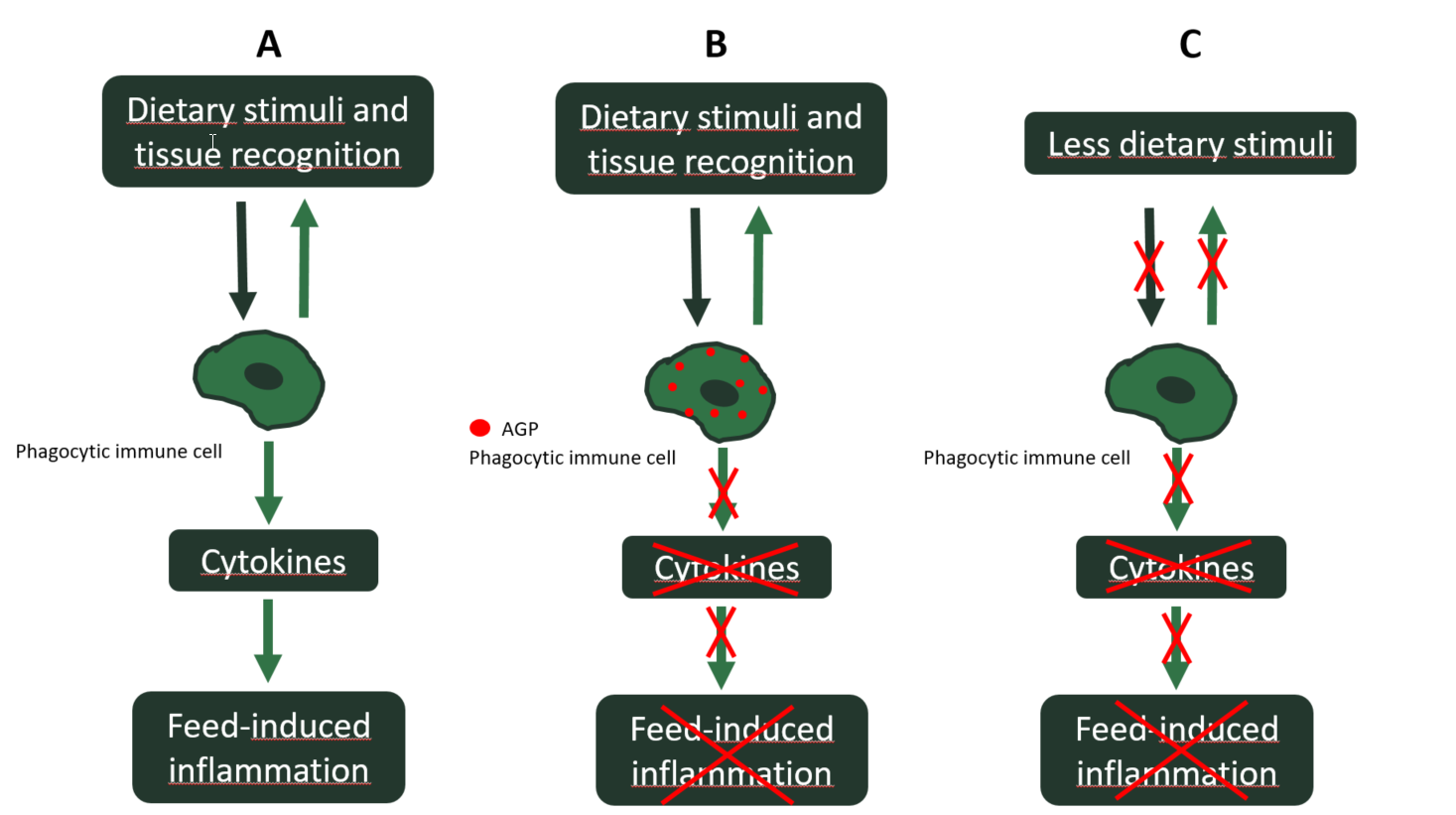 Figure 2. Anti-inflammatory effect of AGP and scenarios without AGP

A: No AGP in feed and inflammation-inducing dietary stimuli

B: AGP in feed and inflammation-inducing dietary stimuli

C: No AGP in feed and reduction of the inflammation-inducing stimuli